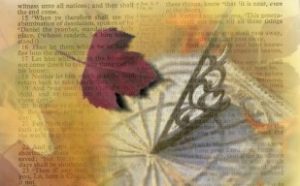 1 John 2:17 “And the world is passing away, and the lust of it.” The world referred to here is not the physical substance upon which we walk and call earth. Rather it is the arrangement or decoration of the age under the domination of Satan, 1 John 5:19 and St. John 14:30. Satan will be ultimately defeated and removed from earths scene by the Lord Jesus, Genesis 3:15, as well as the arrangement of the age that has been under his dominion since Adam and Eve handed it over to him in the Garden of Eden in Genesis 3, which is what happened when they disobeyed God, failed to keep the intruder out, Genesis 2:15, following his enticement rather than God’s instructions!  But those who pursue the ways and will of God are promised an everlasting future, a staying place if you will, in God’s restored order. It is then that the ultimate fulfillment of Jeremiah 29:11 will come to fruition, “For I know the thoughts that I think toward you, says the Lord, thoughts of peace and not of evil, to give you a future and a hope” or as KJV says, To give you an expected end.” When the “god of this world”, 2 Corinthians 4:4, entices you with the lusts of his domain, remember the end! The end that God has planned for His people is promised only to those who abide, i.e. stay in the place and state of that recreated relationship to Him, expecting that ultimate fulfillment of His provision.

What Is Passing Away?

The things of this world are passing out of sight,

But the people of God will abide in what’s right.

Scripture quotations are from the New King James version copyright by Thomas Nelson Co. and are used by permission.

Devotional, Discipleship, Poem, Teaching
Abide, Bible, Overcomers
Spiritual Status
A Promise To Those Who Abide In Him