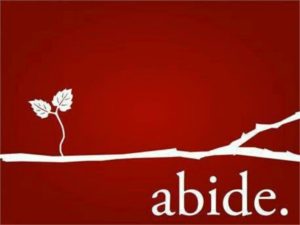 The purpose of a vine, particularly a grape vine, is to bear fruit; but in order to bear fruit, the branch must stay connected to the vine, as we see in John 15:3, where Jesus uses a vine and its branches to illustrate Himself and our relationship with Him. Now, the question is, how do I abide in Him? In Romans 11:1-22, Paul addresses this question as he refers to Israel (who God referred to in both Isaiah 5:1-2 and Jeremiah 2:21 as His vine), pointing out that some of the branches of that vine were broken off because of unbelief, and we, being grafted in, are sustained by faith saying, “Because of unbelief they were broken off, and you stand by faith” (verse 20). The same faith in Him and His finished work, by which we were grafted in (Ephesians 2:8-9), is the same faith by which we abide in Him. The fruit that He is looking for may be viewed as reproduction, which is bringing others into His family and kingdom; but, as a part of being His witnesses, it may also be viewed as development in His likeness and characteristics (Galatians 5:22-23), by which we “shine as lights in the world” (Philippians 2:15). Continuing to read Jesus words in John 15, coming to verse 7, He says, “If you abide in Me, and My words abide in you, you will ask what you desire, and it shall be done for you.” John explains in 5:14-15 of his first epistle that, “this is the confidence that we have in Him, that if we ask anything according to His will, He hears us … we have the petitions that we have asked of Him.” His will in the original language means His determination, His choice, His purpose, His decree, etc. So how do I know if I am asking according to His will? Jesus gave us the answer in John 15:7… when, by abiding in Him and His words abiding in us, His will, revealed through His words, becomes our utmost desire and will.

Faith That Abides In Him

When in my Lord I do abide,

Then the Father is glorified.

And what I ask for I receive,

When I remain in Him and believe.