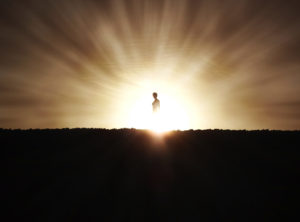 The Resurrection of Jesus was an essential part of God’s redemptive plan and work, occurring on “the first day of the week”, Matthew 28:1-8. The first day of the week is the eighth day of the weekly cycle, and the number eight in the Scripture is associated with new beginning. The Old Testament era of law was completed with Jesus death on the cross, and now His Resurrection signifies a new era with opportunity of a new life through Him. It was on that same day that Jesus appeared in the midst of the assembled disciples and “breathed on them” saying, “Receive the Holy Spirit” John 20:19-22. I believe it was at that moment that they became the first following Jesus Resurrection to be “born again” John 3:3,7; even though they had been with Him for approximately three years this experience could not happen until His work of redemption had been completed. So now it is a new era and they are the first to receive new life; as God breathed into man’s nostrils the breath of life in genesis 1:7 so Jesus now breathes the breath of new life, for that lost by sin, upon His followers in John 20:22. Jesus Resurrection guarantees that God accepted His sacrifice, and of our resurrection in and by Him. It is unfortunate that Christendom has adopted the term “Easter” (which comes out of heathen idolatry, as does the tradition of the Easter egg) as synonymous with Christ’s Resurrection; the KJV uses the word “Easter” in connection with this season, Acts 12:4, but modern translations more appropriately use Passover. Passover sacrifice was completed, and now like Israel God’s people are set free to begin a new life in Resurrection power!
A great message
By Rose Hill
On the first day of the week at early dawn,
The women came to the tomb and Jesus body was gone.
They were perplexed and wondering,
When two angels came with a message to bring.
He is not dead good news we are giving,
Why do you look for one who is living?
He is not here He has arose,
Go and tell this message so everyone knows.
Scripture quotations are from the New King James Version copyright 1982 by Thomas Nelson Co. used by permission.